It was in the early days of Providence that its humble residents demonstrated that the cause they had espoused in various parts of the world, and for which they had come to make their homes in the mountain wilderness, had taught them obedience to counsel from Church authorities.

From the nearby canyon they had hauled logs with which to build their first school house.  Peter Maughan, who was then the religious leader of Cache Valley, came to Providence one day.  He saw the large pile of logs on the northwest corner of the present school block.  “What are you going to do with those logs?” he asked.  “We are going to build a school house,” they replied.  “Are there any more logs like that in the canyon?” he continued.  “Oh yes,” they answered, “plenty of them.”

Then in a subdued tone he proposed:  “Suppose we haul these logs over to Logan and build Apostle Ezra T. Benson a house.  You can get some more in the canyon for your school house, can’t you?”  So the logs were hauled to Logan where several Providence residents helped build Elder Benson a much needed house.

Later, more logs were hauled from the canyon, and the first school house in Providence was built on the northwest corner of the present school block.  It was constructed in the latter part of 1859.  On the west of the building the stars and stripes waved from a large flag pole on holiday occasions.  The school, built by William Fife and John Maddison, was about 32 feet long and 14 feet wide.  Both the west and east sides had two windows, and a door opened on the south.  A rectangular piece of lime served as chalk and a piece of sheepskin as an eraser for the blackboard hanging on the north wall.

In 1864, when the town was laid out according to its present lines, the old school house was moved a block south, where it stood for many years next to the Old Rock Church. 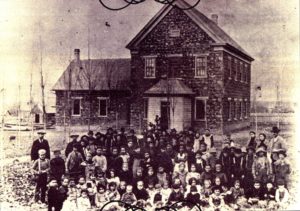