Recently a friend came to me asking if I had a picture of the old Pavilion. In as much as I am one of the oldest citizens (88+) of our fair city it is assumed that I knew about our town. This request brought back memories of not only the Pavilion but other places that have long since disappeared.

Having been born here in providence in 1926 I know very little of events that took place from the towns beginning in 1857. I only wish that more had been written to let us know what really went on in those first 70 or so years.

Many of these original practices were still in use when I came along, things like outhouses, water from the stream in front of the house, no inside bath tubs, only cold water taps inside the house for the fortunate and the old Monarch or Majestic coal stoves or ranges. A party line phone service, radios were rare, bathing in a #3 tin tub, ice boxes, root cellars, pig pens, chicken coops, big gardens, horse and buggy rides, team and wagon, country doctors, mid wives, home remedies for illnesses. The list go on.

Transportation was limited to a few cars on dirt or muddy roads, Model T fords, or other old vintage cars no longer manufactured, were the future means of transportation. In my early years, it was either walk, ride a bike, or hitch a ride from someone going your way.

Each one of the above-mentioned items could be a story by its self. After much reminiscence, I decided I had better get back to my story of the pavilion. Thank goodness for the three history books of Providence. Because of them, we do have some good information and photographs available to us. Most of my story about the Pavilion comes from personal memories and from perusing these records.

I am sure that almost every town in the valley developed some sort of recreational facility as their community grew, like Millville’s open air dance floor along the Blacksmith fork river. With transportation limited each town had its own way of dealing with social events.

In the early days of Providence, the emphasis was placed on church, school, and other merchandise facilities. Entertainment was held in these buildings. Most social events were held in the rock church or the school until 1905 when a group of stock holders got togather and made plans for a larger, more useable facility to meet the cultural and sporting needs of the community.

The site chosen for the new building, named the pavilion was on main street at about 35 south on the west side of the street; somewhere near the present city offices are located, maybe just a bit south of there. The foundation of the building was made of rock from Providence Canyon. The timber came from blacksmith Froe Canyon. It was a large structure with a stage, dressing rooms, and a large auditorium with an oval ceiling to improve acoustics. The floor in the hall was maple with rubber cushions making it one of the best dance floors in the valley at the time.

The main floor was well equipped with a large stage. It had a curtain which could be raised and lowered (it sometimes didn’t work too well) props, dressing rooms, and other stage facilities. The main seating area or auditorium, had removable wooden chairs which could be stacked for dances and sports activities.

There was a large coal furnace in the basement which supplied hot air for the main floor.  There wasn’t a kid in town that didn’t love to sit on the grate on the main floor and warm himself from the weather outside.

The bottom floor or basement was an open area, except for a kitchen, a barber shop and a confectionery that supplied snacks for some events. The main area in the basement became a large area where Old Folks parties were held. It was also home to the newly created second ward from 1909 until 1910 when the ward moved to the basement of their new chapel.

Much is told in the history books of the many dramas which took place on the main floor. Traveling troupes came regularly to perform there. It cost 25 cents for regular admission and 35 cents for reserved seating.

The town was famous for its many drama productions which brought crowds from all over the valley. I can remember going there as a kid and watching with much interest as local would-be actors tried their hand at the entertainment world.

The Pavilion was one of the few places in the valley where major activities took place. Records indicate that the city council had problems trying to maintain a peaceful atmosphere during some of the Saturday night dances. I guess that is why, the city fathers hired a man to build a jail just back of the pavilion. It was a small building with bars over the windows and door. Kids had a fun time hiding in the jail because it was seldom ever locked or in use.

In 1918 after World War I use of the building was not sufficient to maintain it financially. The original stock holders sold the Pavilion to the city for $6000. It was in the plans to update the structure and try to make it profitable but that never happened.

In the mid-thirties with more transportation available and the UIC railroad (1914-1947) going through Cache Valley it became easier for people to go to Logan for their entertainment. One could ride the train to Logan for ten cents. These advantages took away most of the outside interests in the Pavilion. This was just one of the factors that lead to its demise.

As I thought of the many times we youngsters had walked or rode the train to Logan many things came to mind, places like the train station on the corner of First South and Main, the Capital, Roxy, and Gem theaters where we watched Tom Mix, Gene Autry or Tex Ritter and others tame the west. It was always a treat to go to Tom and Joe’s confectionery stand on North Main for ten cent Hamburgers complete with dill pickles, or to Low Cost Drug Store for a large assortment of candies.

As we got to high school, it was the Dansante where a live orchestra played music on Saturday well into the night. Then it was on to Wingets or the Bluebird for refreshments. Wingets had malts, sundaes, or banana splits for about fifteen cents. Pete’s Spudnut on South Main and the Bluebird Café and Fountain also had lots of ice cream dishes. But the favorite at the Bluebird  was the Iron Port and Cherry drinks. Just a short time ago our family went to the Bluebird and to my surprise they still server me that special drink. This took place more than seventy years after my high school days. It is good that some things never change. Oh, what great memories.

Logan too, has had some major changes. Places like Moses Pool Hall, Owl Billiards, Kowallis Hardware, Lindstrum Furniture, the shoe repair shop, the automobile repair shop on Federal avenue, CC Anderson, the Budge Clinic downtown, the weekly wrestling matches and much much more.

In 1939 the school board added onto the school with a gymnasium and other facilities. From then on all of the sports and other large events used the school gym. The pavilion became less used and eventually became an eyesore to the community.

In 1946 a contractor was hired to demolish the Pavilion. I assume that the jail was removed at the same time. So, came an end to another facility that had brought mush joy to oue small community and the valley in general.

I have often thought of the events that took place in these small towns. Places like dances at the Pavilion that brought couples together, after so many years young people meeting and marrying those from their own home towns, a new era opened up when transportation improved it became easier for young people to explore other avenues from around the valley.

My hope is that this article, the history books and other documents which I am sure are available, will in some way remind future generations of what life in the small towns of Cache Valley was like way back then. 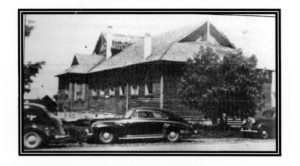 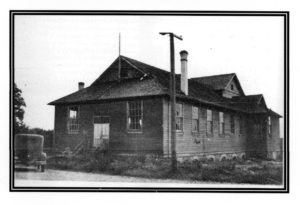