Providence was founded in 1859 by pioneers belonging to the Church of Jesus Christ of Latter-day saints. Because they had a firm belief that “the Glory of God is Intelligence,” education was always a priority. As soon as Basic Shelter needs were taken care of, the first public building had to be one large enough for the church meeting on Sunday and a school on weekdays. Throughout the history of providence, education has continued to play a pivotal role in community life.

Building for the Future: As needs changed, so did the building.

Logs: In 1860 logs were hauled out of Dry Pole Canyon, east of town, for a school to serve the 18 families living in the fort. Located on the southeast corner of the present block, it was a large one-room building with fireplaces at both ends. Students drought their own benches, and the curriculum was provided by whatever books were found in the community.

Rocks: By 1877, with enrollment of about 150 students. a larger school; was needed. Rocks were brought from Dry Pole Canyon for a two-story building. It had wooden floors, was heated by an old “monkey” stove, and was served by two outhouses-one for the girls and one for the boys.

Bricks: In 1905, the Rock School was replaced by a large two-story structure built of yellow bricks. An early description noted: “It was grand. We had eight classrooms, a reading room and an office. And a wide staircase and nice big arches over the doors. It was everything you could ask for.” Included was a bell tower with a heavy rope that hung down into the hall. this bell called generations of students to school and can still be heard today. Over the years, the bell has also provided countless students with an excuse to sneak in to ring the bell at odd times of the day and night.

Because Providence benefited from school taxes paid by the power plant at the mouth of Logan Canyon and the sugar factory south of Logan, this building was considered the finest school in Cache Valley.

Additions were made in 1939, when the gymnasium was added. In 1957 when a new classroom wing was attached; in 1969 and 1972 with a media center and more classrooms, But a new fire code and deteriorating conditions finally doomed the brick building. it was demolished in 1992.

Quest for education: the Providence School always operated on a nine-month schedule, even when six or seven months was the norm in other communities. In early days care of the school was provided by locally appointed trustees. in 1905, the county was consolidated into school districts.

The providence school always attracted highly qualified teachers. Inthe early days, they were paid in bushels of wheat-1 1/2 bushel per student per  month. It was considered a “Common Grade School,” with one teacher for all classes. but in 1871, Two teachers were hired: a male, paid $600 per year; and a female, Paid $300 per year.

In addition to the prescribed curriculum, other classes added enrichment. In 1910, agriculture-including raising chickens, calves and potatoes-and woodworking were offered for boys; and dress-making, cooking and food preservation for girls. Providence also had one of the first school bands in the county. Operettas were performed to raise mony for a piano, as well as school books and pictures.

Heart of the community: After the gymnasium, stage and lunchroom were added in 1939 (at a cost of 32,618.45), the Providence School became a center for community activities. It was the site of elections, Lions Club meetings, church bazaars and turkey-and-sauerkraut dinners, community and church plays, basketball leagues, dances, town meetings, holiday festivals and more, providing a wealth of memories and legacy of community interaction and involvement.

‘What did we play at recess?” Well, marbles, tag, jump rope and baseball north of the school. Just what kids do now. 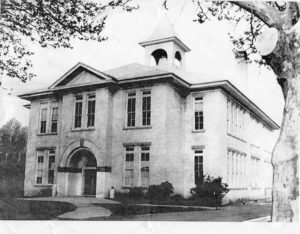